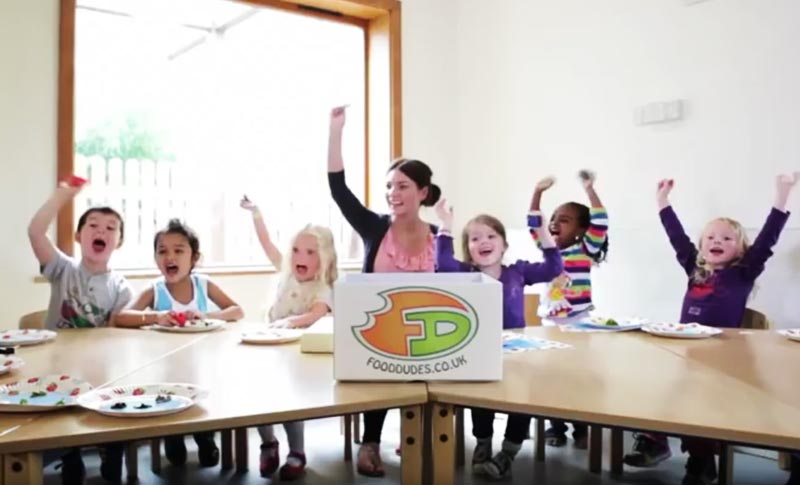 Currently there is an obesity epidemic, which is costing the NHS millions of pounds. A prevention method to obesity and other serious illnesses, e.g. cancer, is consuming fruit and vegetable. There are more than 40 million preschool children globally currently overweight. During my Masters Research project I have investigated young children’s consumption of fruit and vegetables in nursery settings by having helped develop and evaluate a behaviour change intervention with my company partner Food Dudes Health Ltd. The intervention is based on three key psychological principles: role-modelling, repeated presentation and rewards. By liaising with my supervisors and company I have led the delivery of three projects; the main project was conducted in six nurseries with over 300 children.

They watched a DVD containing animated role-modelling Food Dudes characters and then received two pieces of vegetable, followed by two pieces of fruit. The children were encouraged to eat the foods and were rewarded with stickers and a tick in their Passport to Healthy Eating for the consumption of individual foods, and a token for their energy tube and a sticker for their Passport for consuming both foods.

In the second phase (indefinite), the children participated in weekly picnics, where the Phase 1 procedures continued and a group contingency reward was introduced where the class was encouraged to work as a team and fill a container to earn special prizes to take home, e.g. a beaker.

Measures of what the children had eaten were recorded directly from each child’s plate residue on a 5-point scale, and then photographed to enable dual coding. Target food consumption was measured at the following time points: Baseline, Mid-Programme of Phase 1, End of Phase 1, and Follow-up (conducted 3 months after the end of Phase 1). As expected, the waiting-control condition made minimal improvements at any point of the programme while only receiving fruit and vegetable provision. However, the intervention nurseries from baseline to follow-up improved their consumption of vegetables by 131% and their fruit consumption by 60% (the waiting-control nursery made similar improvements after receiving the Programme).

Through working with my academic supervisors and my company partner, I was able to conduct this controlled evaluation study which has gained merit by being a winner of Local Authorities Research and Intelligence, Best Use of Health Research 2013.

The evidence gained in this study will be beneficial to the research area, and as
my Masters period is coming to a close I have been fortunate enough to attain PhD funding with Coleg Cymraeg Cenedlaethol where I will continue to work in Partnership with Food Dudes Health Ltd.